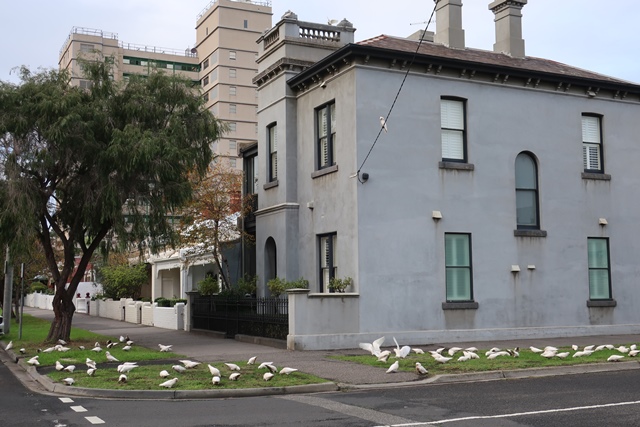 They arrive at about 8 am – swirling, screeching flocks of little corellas. There’s such a carry on that curious children come to their front doors to see what’s going on.

There are so many birds that they weigh down the already heavily laden olive trees on the nature strips. They gorge – completely indifferent to passers by. Their breasts are stained purple with feasting on olives. They graze on the grass of the extended nature strips.

They also like the seed balls of plane trees which hang like dull ornaments on the winter trees. The seed balls have been shredded to a paste carpeting the road way.

Albert Park has experienced an incursion of little corellas not seen before in this neighbourhood.

I asked birdwatcher Euan Moore about the phenomenon. ‘They’re looking for food’, he said. ‘A lot of inland birds have been moving south-eastwards in recent years.  A number of factors will be involved

More concerning is that the corellas could be displacing other birds for scarce tree nesting hollows.

And then they were gone.

The little corellas were in Albert Park between about 10 June and 30 June.