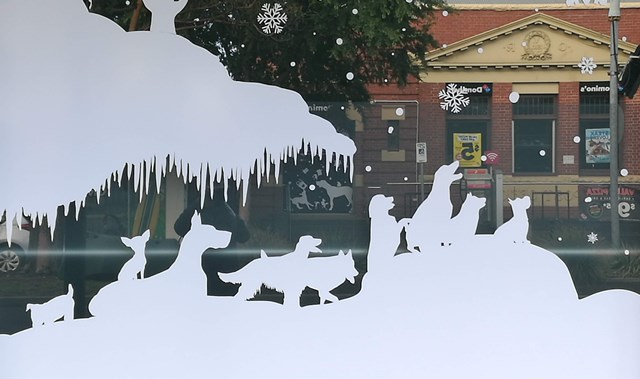 Year of the Dog

Bay Street is often said to be the heart of Port Melbourne. It can be hard finding that elusive heart on such a long street that runs all the way from the Bay until it curves towards the City.

With Port’s great transition over the last thirty years essentially complete, at least in the built form sense, where is Port’s identity to be found?

This year’s Christmas window decorations on Bay Street suggest the answer. They reflect the central role dogs play in the life of Port Melbourne. Dogs are omnipresent. The most popular dog in Port is the French bulldog, partly because they are popular on social media, according to Domain.

The white vinyl Christmas decorations, now installed for the sixth year, are the brainchild of international display artist Roz Zweifel.

On a visit to Tasmania, Roz looked up Greg Ray, author of Why Dogs Don’t Bark at Christmas, and saw in the book a perfect theme for Port’s 2018 window displays. With his willing permission, the story is now told on Bay Street’s shop windows, beginning at Grey & Bliss, each window a new page leading to the answer.

The story windows are complemented on other windows with stencils of elves, gifts, candles and even more dogs. The stencils connect the long street and elves tie in shops around the corners. No two windows are alike.

The design for each window always begins with a conversation with the shop owner about how much or how little of their window they are happy to make available for decoration. Shop displays and business logos are respected. Vacant shops create even more canvas. There is no mean formula or apportionment relating the decorations to a shop’s financial contribution –  it’s the willingness to join in that’s the thing. The exuberant windows are in the best Christmas tradition of generosity.

Through a conversation in a coffee queue, Roz  made a connection with the graphic design department at  Monash University. Students are only too glad to be part of the great paste up which leads to further conversation on the street. This year Roz brought over two students from Devonport, strengthening the Tasmanian connection with Port. 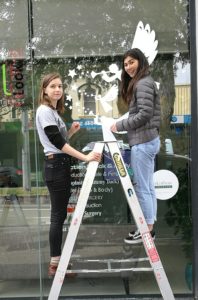 The Christmas windows are just one of several initiatives of the Port Melbourne Business Association. No surprise that President Paul Littman, the driving energy of the Association, once had a company called the Ideas Factory. He’s an ideas machine! He is supported by Tony Hill (McCluskys Lawyers) who holds the story of Bay Street’s evolution over the last thirty years, and well loved George Tsingos (Elegant Slax) – the presence on the street.

With retail strips under pressure from online shopping, Bay Street has a low vacancy rate – 7 shops out of a possible 200.

All that the Port Melbourne Business Association asks of us is to shop local and support local businesses.

Now I have to admit, heretically, to not being a dog lover, nor am I hooked on Christmas decorations. But I admire the creativity of the project, how responsive it is to the pulse of Port Melbourne, and that it is unique in a generic world.

Can there be too much dog love? How much dog is enough? The Port Phillip Council is considering whether to open all beaches to dogs during summer up to 9.30 am and after 7 pm. A topic for another day.

There are no queues to see Port’s Christmas windows. The Bay Street Festival is on Friday 30 November from 5pm. Meet Greg Ray, author of Why Dogs Don’t Bark at Santa at Three Four Knock on the Door on its last trading day before it re-opens as Mary Martin, a general bookshop.

or even better down Bay Street

Greg Ray has written several other ‘Why?’ books for dog lovers of all ages