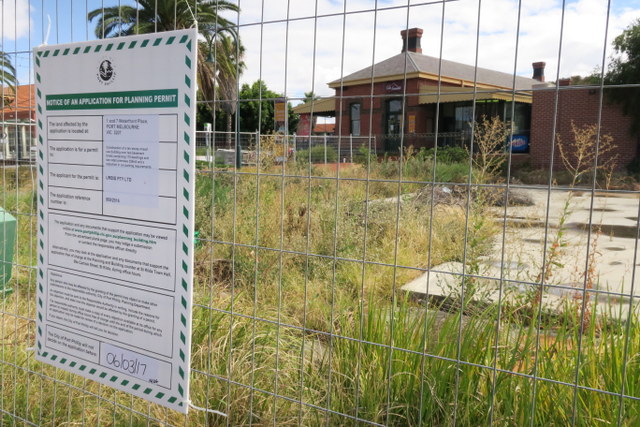 A planning application will soon be decided by the Port Phillip Council for the blighted, fire ravaged site at 1-7 Waterfront Place, Port Melbourne.

The site’s deterioration and dereliction following fires in September 2014 has been a source of deep exasperation to all and there’s a mood in favour of the site’s re-development – for community benefit.

In the early ’90s, the same site embodied all the promise of  ‘A Beautiful World by the Bay’, the tag line for the brand new waterfront development at Beacon Cove. 1-7 Waterfront Place was to be the heart of the new community with a childcare centre, gym and pool.

The childcare centre had a short life, closing in that brief period just before the pressure for child care places became intense. The gym, especially the pool, remained popular. And so it functioned for many years until the site was acquired by the Action Group. From then on the site’s redevelopment was inevitable.

Beacon Cove was developed in the ’90s under a Comprehensive Development Zone. As the name suggests, that is a pretty permissive kind of planning zone. Over many years and several local and state elections, the Council worked with the community to develop a suite of comprehensive planning controls better suited to the contemporary context. The controls were incorporated into the Port Phillip Planning Scheme in 2014 and will guide decision making on the development proposal.  The controls include both detailed prescriptive requirements as well as nuanced aspirations for what the site could become.

Neighbouring residents would have preferred that the low rise form also be the shape of the future but the series of Beacon Cove towers to the west provided an alternative reference point. In the post-2010 Melbourne height environment, the argument for two storeys on that site was hard to sustain. The buildings had served their purpose well – creating that third space for Beacon Cove and Port Melbourne people to connect.

Pared down (unfairly) to simplistic essentials, the planning controls for 1-7 Watefront Place mandate a maximum 10 storey development above a 3 storey podium. 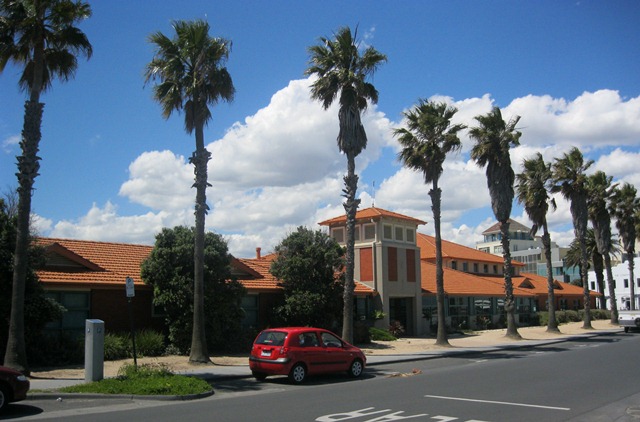 That low rise building had one very strong positive attribute – it allowed the foreshore to remain in sunshine almost all day long throughout the year.

The architect for the proposal is Nonda Katsalidis. His first building in Port Melbourne was the 18 level twin towered hm@s completed in 2001. Like 1-7 Waterfront Place, the development was extremely contentious in the community and much of the debate centred around the extent of overshadowing of the foreshore.

The Advisory Committee appointed to consider that development recommended the more stringent winter solstice as the reference point for overshadowing to the southern kerbline of the foreshore. The final outcome of their advice was that the two towers of hm@s were set well back on the site with lower elements to Beach Street in order to minimise overshadowing.

The hm@s development was the catalyst – the spur – for the inclusion of a strong overshadowing control in the City of Port Phillip planning scheme as far back as 1999.

However, the way the overshadowing controls are expressed in the Port Phillip planning scheme DDO23 covering 1-7 Waterfront Place invite the very outcome that is put forward in this planning application –  compliance with the must requirement and a half hearted approach to the should requirement

Development must not cast a shadow beyond the southern kerb line of Waterfront Place between the hours of 9:00am and 3:00pm at the September equinox. A permit cannot be granted to vary this requirement.

It is interesting that the application for the neighbouring London Hotel was refused by VCAT on the basis of the extent of overshadowing of the foreshore.

VCAT’s argument is worth quoting

The fact that the abutting Anchorage development already casts shadows and submissions that there would remain some 11 kilometres of unshaded foreshore do not persuade us that the extent of shadowing that arises is acceptable. … More broadly, we find this impact of the proposal places it directly at odds with the key strategic outcomes sought by State and local policy because of the manner in which key components of the foreshore reserve would be compromised. (91)

The positive outcomes associated with this permit application are not, however, outweighed by the negative impacts upon the public and private realms that would result if this development is approved in its current form. We are not satisfied that the outcomes and design objectives of DDO1 are met nor State and local policies that emphasise the important civic role of the foreshore and its pathways.2

In the statement accompanying their planning application, architects Fender Katsalidis are damning about Beacon Cove and Waterfront Place.

They find  it ‘depressing and inhospitable’ (and who could argue?)   Although ‘redolent with opportunity’ the precinct is ‘maudlin’.1 The precinct doesn’t meet the expectations of a place that has served historically and currently as an arrival point. There is no sense of welcome.

How far does their own proposal go toward addressing their own withering critique?

The design guidelines for the site are so prescriptive and so detailed that the scope for architectural flair is limited, and you may think that’s a good thing. I’m not sure. It has led to a curious development proposal. The development is an expression of  the detailed designed guidelines which have created a domestic urban townhouse street level – almost like a skirt around the tower – with a bulky superstructure. (This contradicts the Council guidelines which prefer two slender towers to minimise bulk.)

On the basis of the hard fought commitment of community and council to the solstice overshadowing test from 1999, I will be submitting to the Council that the overshadowing of the foreshore at the winter solstice should not be permitted, notwithstanding that the planning control is written in should language. Councillor Dick Gross was a particularly strong advocate for protecting the foreshore from overshadowing.

Are there some places in the public realm that warrant the most stringent level of protection from overshadowing? Yes there are. Read this explicit control for the Yarra River

The construction of buildings and works which would cast a shadow across the south bank of the Yarra River between 11.00 am and 2.00 pm on 22 June is prohibited.

To get a sense of the proposal, visit Urban Melbourne’s website – Port Melbourne’s Waterfront Place saga enters a new phase 27 02 2017 which also shows some of the earlier proposals for the same site.