A place for the people

When I go to [name] Edge at Federation Square I’m often drawn beyond the speaker to the gum trees on the Yarra River bank.

Some of my most memorable experiences of being a citizen in Melbourne have been at Federation Square. Not just a minute’s silence, but a collective deep silence, for the apology to the Stolen Generations, and witnessing the Tanderrum – the ceremony of the gathering of the five clans of the Kulin Nation. The configuration of Federation Square seems just made for that ceremony.

The relationship of Federation Square to the Yarra River has been felt by many commentators to be unsatisfactory. Federation Square and Birrarung Marr lead parallel rather than integrated lives with the square separated from the River by several impressive but rather inaccessible stairways.

The presence and centrality of the Yarra River in the life of Melbourne is being re-asserted with the Yarra River (Wilip-gin Birrarung murron) Protection Act, passed last year – grounded in the historical and continuing role of the Wurrundjeri in caring for the Birrarung, the river of mists.

Birrarung Marr (2002) has become one of Melbourne’s most successful public and pedestrian spaces – spacious and generous – connecting Federation Square with the sporting precinct. Although . . At times – such as during the Australian Open – it is overwhelmed with events and the public is squeezed to the edges.

Arising gently from Birrarung Marr is the Tanderrum Bridge connecting Birrarung Marr with Melbourne Park which opened for the Australian Open last year.  This is is how John Wardle Architects describes this bridge

The Tanderrum Bridge is a civic instrument, revealing the city’s history, orienting to civic markers, stitching together errant landscapes and connecting public space.

The Tanderrum Bridge sits in a creek bed 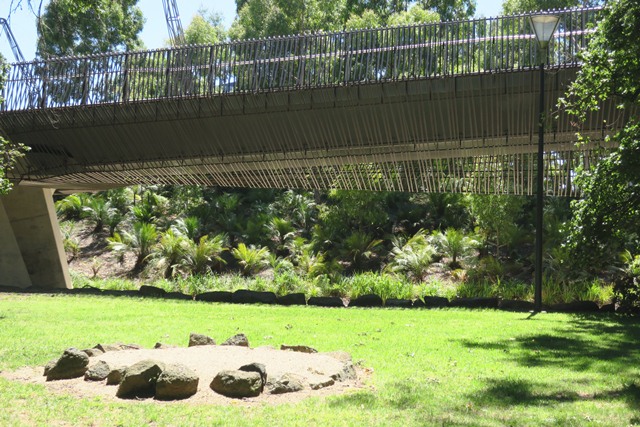 During the bitter conscription referendum debates of 1916, as many as 80,000 gathered on the Yarra River bank. Port people were there, we know, because we’ve seen a similar postcard to the one below in a scrapbook kept by A. E. Davies, a former mayor of Port Melbourne. 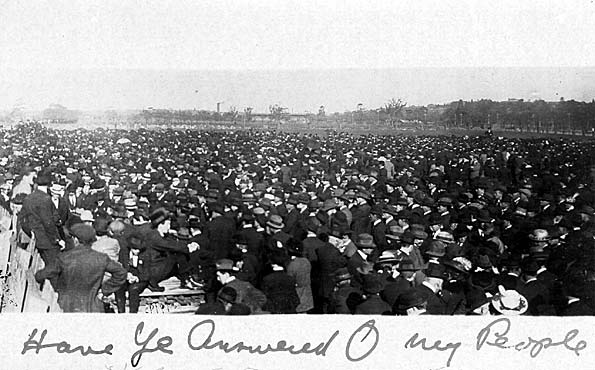 The handwriting of John Curtin who addressed the crowd on the Yarra River Bank at an anti-conscription rally in 1916,  The Le@rning Federation

In 1925, the Melbourne City Council created 10 stone circles for the speakers and planted elm trees to shade those who gathered there.  Nearly a hundred years later those elms offer luxuriant, deep shade. It feels a bit like a cemetery – a retreat away from the active riverside path. The history of free public debate in Melbourne is celebrated there.

Last night, the recently formed Citizens for Melbourne presented a petition to urge the City of Melbourne’s support in opposing the  Apple Store at Federation Square. The Council also supported a motion from Cr Leppert calling for a re-think on the entire proposal.

At an M Pavilion discussion on Democratic Public Space, Beatriz Maturana Cossio, founder of Architects for Peace, was impatient with the outrage about Apple at Federation Square. It’s not a square, she said emphatically. In Chile, every town and city has a square, and squares are free, anything goes places – no permit required. Federation Square is not a public space, she went on, it’s an event space. The constraints under which Federation Square operates were quite antithetical to her understanding and experience of a democratic public space.

Vanessa Bird, president of the Victorian chapter of the Australian Institute of Architects, has called for a masterplan for Federation Square to guide how it might change with the changing city.

Perhaps that offers one way to think about how a Yarra building might be demolished in order to make a stronger connection to the Yarra as a truly public place.

And that architects with a comparable sensitivity to the place and its history as John Wardle Architects are involved.

Citizens for Melbourne Our City Our Square

Janet Bolitho is on the board of the Yarra Riverkeeper Association

“The review will tap into the vision Victorians and the very best urban design minds have for Melbourne’s public square – considering ways to deliver more public space, encourage public gatherings and provide better access to the Yarra River.”

This result was achieved through the strategic advocacy of the National Trust in nominating Federation Square for heritage listing, and the design flair, passion, historical nous and impressive commitment of the convenors of Citizens for Melbourne.

Citizens for Melbourne Our City, Our Square