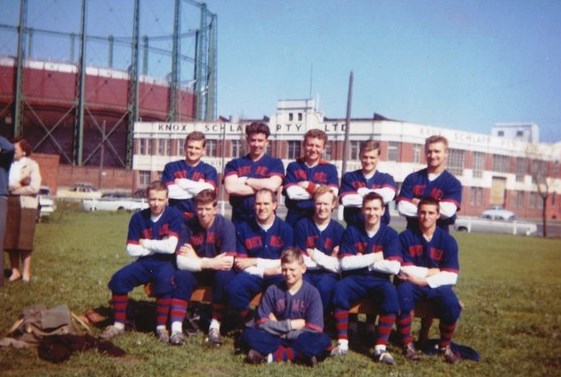 A story of urban change

This photograph tells a big story. In the foreground, the Port Melbourne baseball team of 1961 on Lagoon Reserve (and doesn’t the woman with her face obscured invite curiousity?) In the background, the gasholder storing gas from the Gasworks and the Knox Schlapp factory.

Knox Schlapp is not as fondly, or as often remembered as Swallows, for example, although the firm clearly had a very substantial presence. What was manufactured there?

Knox Schlapp succeeded an earlier firm, Schumachers, which specialised in the importation, manufacture, installation and repair of flourmilling equipment. An extensive collection of 915 photographs held by Museums Victoria document the range of the products sold and manufactured there.

After Schumacher retired, the business was acquired by Knox Schlapp and the focus changed from agricultural to mining machinery importers. Knox Schlapp was a partnership formed between Herman Schlapp and William Knox – both deeply involved in the early years of Broken Hill Propriety Ltd. Schlapp was a metallurgist recruited from America. His innovations impressed. The firm moved to Reservoir in 1977.

In 1982, Labor won the state election after twenty seven years of Liberal government. The pent up energy in the Cain government expressed itself in an ambitious and energetic programme of reform.

The Ministry of Housing commissioned the firm of newly graduated architect, Peter Elliott, to design the Knox Schlapp public housing development. Elliott had spent his student years in a shared house in Fitzroy, working with others ‘focused on improving social housing as well as rethinking responsible urban renewal. … This was a period of inner suburban slum clearance programs and new freeways battering their way through established neighbourhoods.’ The Knox Schlapp housing project gave him the opportunity to put housing ideals into practice. The Fitzroy context was deeply similar to the challenges faced by South Melbourne at this time.

The housing project received several prestigious architectural awards in 1985. It was a human centred design approach to compact, higher density living. It is a perimeter block development with a courtyard in the middle. The presentation of the aggregation of buildings to each street is different yet unified in theme. It is like an assemblage of houses within a bigger house. The ground floor units have small front yards with direct access to the street.

In 2017, over thirty years later, Peter Elliott was awarded the Gold Medal, the highest honour conferred by the Australian Institute of Architects for his outstanding contribution to architecture and the public realm. Included in the citation were these words ‘a clear focus, gentle tenacity, integrity, and generosity of spirit underpin Peter’s approach to life and practice.’

According to a recent article in the Guardian, there are about 80,000 people on the public housing waiting list. In the 2019/20 budget, the Andrews Government committed to building 1,000 public housing units over three years. The Council to Homeless Persons says it is well short of the 3,000 a year that are needed just to house those on the priority waitlist.

Hopefully talented emerging architects, as imbued with purpose as the young Peter Elliott, will be given an opportunity to design some of those dwellings.

This is a photograph of the same location in June 2019, 58 years later. The highly sought after 1 Graham St apartments have replaced the gasholder, a copse of trees obscures the housing development. The only continuity is that sport is still played on Lagoon Reserve all year round.