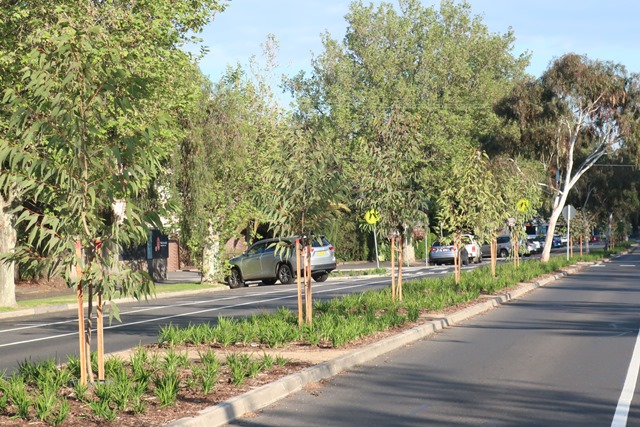 In November 1839, one hundred and eighty years ago, Wilbraham Frederick Evelyn Liardet, his wife Caroline and their nine children arrived in Hobsons Bay on board the William Metcalfe.

Rather than passing through as so many others did, they settled on what was then known only as ‘The Beach’. Over time the place came to be so strongly associated with him that it was known as ‘Liardet’s Beach’ before becoming Sandridge, and later still Port Melbourne.

Researching a walk titled The Liardet Legacy led me to a rich web of associations.

Locally, Liardet St is a legacy – it’s the main entry to Port Melbourne from the east – the going out and coming home street.

W.F.E. – Wilbraham Frederick Evelyn Liardet. Evelyn runs like a thread through generations of the family.

John Evelyn was a contemporary of Samuel Pepys. At the invitation of the Royal Society, he wrote the first book they ever published – Sylva: or a discourse of forest trees & the propagation of timber.

Evelyn had travelled widely in Europe where he had made many observations about trees. England had been denuded of trees from the aggressive demand for timber, especially oak trees, for ship building.

Sylva is still informative, and entertaining, with many classical references. In the entry on the plane tree, Evelyn writes that Xerxes so doted on the plane tree that he neglected his vast army to contemplate them. The entry concludes with a note from Pliny that “there is no tree whatsoever which so well defends us from the heat of the sun in Summer, nor that admits it more kindly in Winter. They will flourish and abide with us, without any more trouble than frequent and plentiful watering.”

In 2014, four hundred years after Sylva, the New Sylva was published. The handsome book uses the same structure and chapter headings as Sylva but includes new sections on climate change and present threats to trees.

In the shade of a plane tree on Liardet St, Penny Blazey, descended from Leonora, one of the nine Liardet children, told how she and her husband Clive Blazey established the Diggers Club in a shed in Albert Park in 1978. The Diggers Club promotes gardening and sourcing, promoting and preserving heirloom seeds. Forty hugely influential years later, they have established the Diggers Foundation to secure the legacy of their work ‘to grow out and trial heirloom seeds, build competence with seeds and ultimately preserve their diversity and our food security’ as well as to ensure ongoing free and public access to their gardens at Heronswood and St Erth.

From the plane tree, we contemplated the next generation of trees – the newly planted Corymbia eximia in the Liardet St median strip, planted in anticipation of Melbourne’s hotter climate, more like the Central Coast of New South Wales.

I came to know another Liardet descendant, Kate Auty, when I was in local government. Then Victoria’s Commissioner for Environmental Sustainability, Kate was, and continues to be, a fierce champion for action on climate change by citizens, communities and all levels of government. “Start where you are, organise, show what you can do” is her creed. Her local community has been actively campaigning for ending logging in the Strathbogie Forest – achieved in the announcement by the Andrews government to end logging in old growth forests on 7 November.

From our fresh, green cool cocoon we are troubled onlookers to the catastrophic bushfires sweeping over New South Wales and Queensland with such tragic loss of life, property and trees. Ancient rainforest trees saved from logging decades ago have been burned for the first time in living memory.

Glen Innes Severn mayor Carol Sparks spoke directly to the issue of climate change. A month before the fires, her Council had declared a climate emergency alongside making every preparation for the fire season.

“My community deserves the unvarnished truth from me, its mayor. Ignorance and arrogance delivered us ashes.”

And how will they find the strength to continue?

“We will turn towards the sober and sensible measures recommended by fire controllers, and by scientists. We will insist that governments at all levels take heed of that advice, for we have seen now up close the result when they do not.”

In conversation with Kate, I learned that her father, then 84, returned to Flowerdale even as the bushfires were threatening the place on 7 February 2009, to retrieve his copy of Sylva.

So runs the power of trees through this family.

The words flamboyant, extravagant, are often used to describe W.F.E. Liardet who lived with flair. Towards the end of his life, Liardet produced 40 paintings of early Melbourne before the Gold Rush, embroidered with memories and coloured with nostalgia.

That artistic thread runs strongly through the generations. The Port Melbourne Historical Society has curated a collection of artworks from the descendants – The Creative Liardets. Several of the paintings draw on nature and the bush. Descendant Pamela Horsley has brought the larger than life Liardet character into her artworks. The written record is all about Wilbraham but Pamela has reclaimed and re-imagined Caroline – investing her with vitality, colour, power and purpose.

The Project Gutenberg EBook of Sylva, Vol. 1 (of 2), by John Evelyn