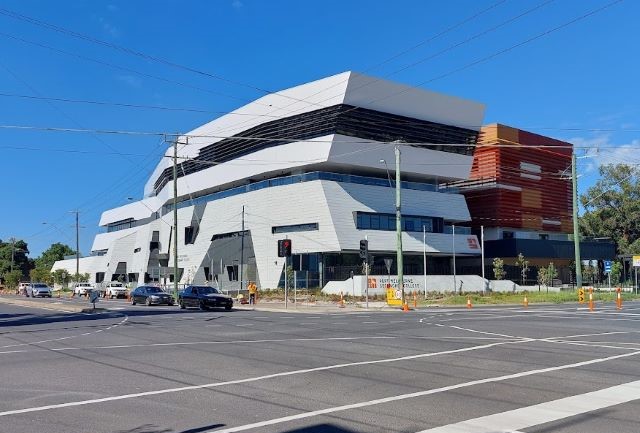 In the burgeoning of local primary schools, the success of Albert Park College and the future of Fishermans Bend lay the demand for a new secondary school in the area.

The College has been taking shape under the lock down observant eyes of community members and passing motorists since the first sod was turned on 16 January 2020.

The four storey school designed by Billard Leece takes cues from the surrounding context – the Spirit of Tasmania, the port, containers and industry. Each of the four sides and four levels of the school has a distinctive presentation and purpose. The school is designed for 1100 students and 124 teachers. Each year the school will take in a new cohort of Year 7 students.

The name Port Melbourne Secondary College was preferred to the Fishermans Bend options in online consultation in June last year. But to have a name is one thing, to translate that into an identity to express a future character is another.

The College asserts its PORT identity.

Designer Ian Scott worked with principal Anne Stout to develop a brand identity for the school – an identity to capture place and the College’s bold presence and aspirations. He abstracted nautical flags to spell PORT.

“The idea of using nautical flags just ticked all the boxes”, Ian said. “Once I started playing with the idea, I knew straight away, this was the one.”

The theme has been taken up in the reception area, to spell the word WELCOME.

A school in the community

After school on that very first day, when the temperature was 350, the gates on Graham Street were open. A familiar sound of multiple basketballs bouncing on a wooden floor indicated that students from the community were attending basketball practice, and that first principle was being embedded from the first day.

Less than 350 m away, also on Graham Street, parents were parting from their preppies with excitement and apprehension heightened by the COVID risk. In due course, those students can seamlessly transition to the Secondary College.

The College is located on the north west corner of Murphy’s Reserve. A strengthening walking desire line across Murphy’s Reserve from Woolworths reveals the links that are being made with that other side of Williamstown Rd and Fishermans Bend.

Flashing 40 kph signs have been installed to alert motorists that there are students making their way to and from school – unexpected by drivers on this route. There is a secure large bike storage shed on site. Improvements to Graham Street to make it safer and more attractive will give students, and their parents, more confidence to access the College on foot and by bike.

All these observations have been made from the outside the College. Inside, some of the facilities include

On that first day I enjoyed meeting Sefi and Ashanti on their first day making their way to the College. After school a student at the tram stop showed me the logo on his cap. These newly designed uniforms were so fresh, so crisp and new, not yet dulled by use.

Media reports noted that Port Melbourne Secondary College was one of 14 new state schools to open at the start of 2022.

So much has gone into the creation of this College – advocacy by community for a secondary school, championing the school from an idea to a reality by local member Martin Foley, the experience and oversight of the Victorian School Building Authority, architects Billard Leece, builders Hutchison, tradespeople and educationalists led by Anne Stout. And all of this has been achieved through the pandemic.

Fanfare for the new Port Melbourne Secondary College. May she sail strongly under her PORT flag.

Read how the site has evolved in this article on Port Places, Murphy’s.

Timeline to a new school