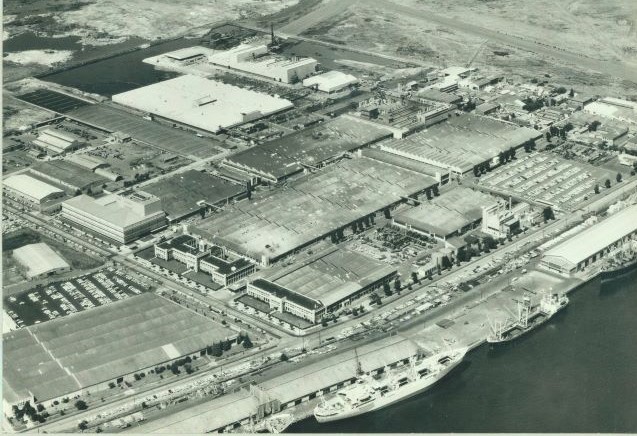 In 1934, Lawrence Hartnett came from England to Australia to lead the newly merged General Motors-Holden. He moved the factory from its crowded, rat infested premises in City Rd, South Melbourne to Fishermans Bend in 1936.

In later years Hartnett entertained the Holden Retirees Club with tales of those early days in Fishermans Bend.

He chartered a plane to get an overview of eighteen possible sites in Melbourne to locate the new factory. Fishermans Bend, then colloquially known as Siberia, was perfect for GMH’s purposes – close to the City and the River wharves. The aerial view revealed a pock marked landscape where sand miners had left great holes which they were supposed to fill and didn’t.

The site was Crown Land and for some time the government was reluctant to sell it. The sale of 50 acres ‘or thereabouts’ was finally negotiated for £400,000. The sale required its own Act of Parliament, The South Melbourne and Port Melbourne Land Act (22 July 1935). The Act was signed on the eve of Edward VIII’s abdication and bears the signatures of both King Edward VIII and George V.

Hartnett was advised against locating to Fishermans Bend by the Managing Director of Vacuum (Mobil) on account of the ground conditions. Hartnett took that in his stride as he had confidence in the abilities of Eric Gibson, construction engineer and project manager, to respond to them. Gibson lived on site during construction.

At that time, the site had no electricity, no gas, no roads or services of any kind.

On 23rd February 1936, Premier Albert Dunstan turned the first sod on what had been a green of the Victoria Golf Course.

On 5th November 1936, in the presence of 1500 guests, Prime Minister Joe Lyons opened the new factory, flanked by a beaming Hartnett. On the same day, the first car assembled at Fishermans Bend rolled off the production line.

The Melbourne Argus carried a special 16 page section on the opening.

In an internal GM document about the opening, these enticing details are revealed:

“The central tower of the Administration Building … supports an air beacon of 1,500,000 candle-power which will serve as a directional beacon for Melbourne’s airport. Surmounting the main beam is another which flashes out the code signal “G-M” … At the base of the beacon is a series of high intensity Neon tubes which outline the upper portions of the tower. The tower, visible fifty miles from Melbourne at night, has been welcomed by the Port and Harbor Authorities as an excellent lead light for ships coming up Port Phillip Bay.”

Those lights were dimmed for the duration of the war which followed.

Hartnett dreamed from those earliest days in City Road about building the first all Australian car, but he was denied the dream. Instead, in 1947, he was recalled to GM Headquarters in the US to be reminded of where his primary loyalties should lie. He resigned. As he put it, he had become too Australian, too insistent on creating a car for Australian conditions. GM, meanwhile, did not believe there was the market to support a local industry, or the necessary suppliers.

Was he bitter? Perhaps people closer to his story can tell me.

Hartnett told a good story – quite often with himself as the lead character. Some have said he gilded the lily, others that he was no shrinking violet. Nevertheless, he left the legacy of establishing the automotive industry at Fishermans Bend.

Confusingly, the GMH administration buildings are not part of the present Government’s landholding known as ‘the GMH site’ on which the University of Melbourne will establish its engineering campus. They were sold in 19931. Plane trees obscure the entrance. It is hard to get a sense of the scale, proportion and impressive qualities of the former factory.

All this I am able to share with you because of the meticulous work of Neil Pogson, archivist of the Holden Retirees Club, who has made all this wonderful information available through their online archive.