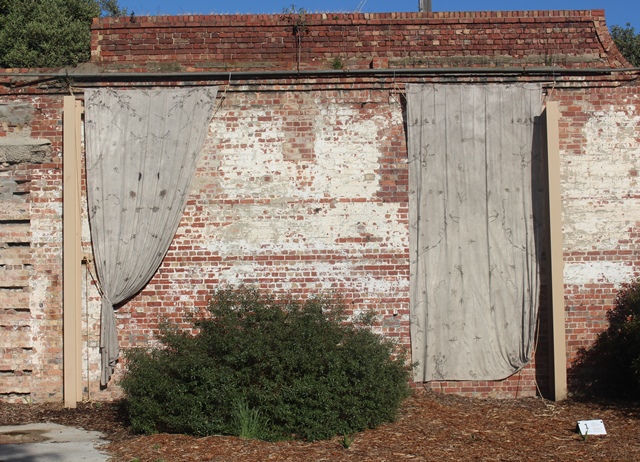 From Nature at Gasworks 2018

The heart and soul of this year’s From Nature exhibition at Gasworks Arts Park is Albert Park Pre-School’s exhibit The Butterfly Effect. It’s in the foyer.

The children have created an exhibit both disarmingly simple and deeply wise. In language of enviable simplicity, their project comprehensively explores the elements of sustainability and conveys our utter dependence on nature’s gifts of clean air and clean water.

Their logo is a caterpillar – that symbol and reality of transformation – of which Gasworks Park itself is an expression.

Last year, I felt a little disappointed that none of the works drew on the nature of the Park itself, the here. Here is always my starting point. This year, Gasworks resident artist Liz Milsom satisfied that missing piece in her work Curtain.

The curtain is pulled aside as if to reveal the theatre of the brick wall and the events it has witnessed. Liz is a printmaker first and foremost and sees the imprint of things everywhere. Plants growing in the Park, weeds and all, are imprinted onto the cloth and then dipped in eucalyptus dye – also from the Park.

Ted Powell’s Possum Art Hotel is a droll commentary on the shrinking habitat for wildlife as our human habitations increase  and intensify. The notice for a building permit went up ahead of the exhibition, just like for a regular planning application, advising of the intent to construct the possum hotel. Each nest box bears the unmistakeable signature of the resident Gasworks artists. The nest boxes were made by the Port Phillip Mens’ Shed. Whether possums take up the offer of accommodation remains to be seen but they will receive a warm welcome. 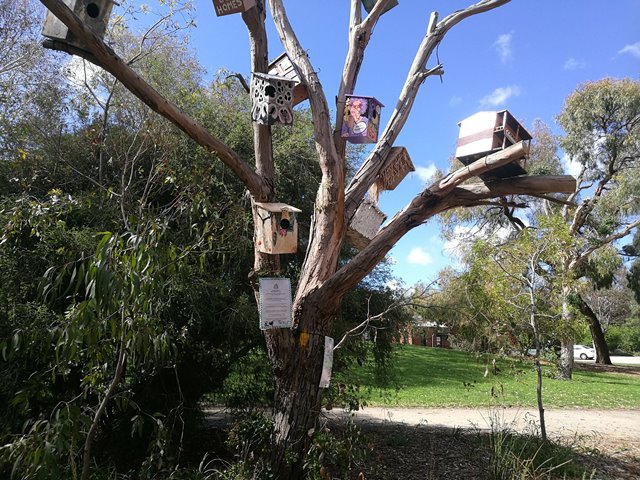 The From Nature exhibition has been challenged on every front.

Disturbing northerly winds unsettled the installation. The works were not exempt from the Gasworks dogs curiousity and explorations. Human hoons did donuts in the Park on the eve of set up. Cup Day’s drenching rain caused Ella Baxter’s exquisite cocoon to slough its skin leaving only the skeleton of her making behind. Quite in keeping with the ephemeral nature of the exhibition. 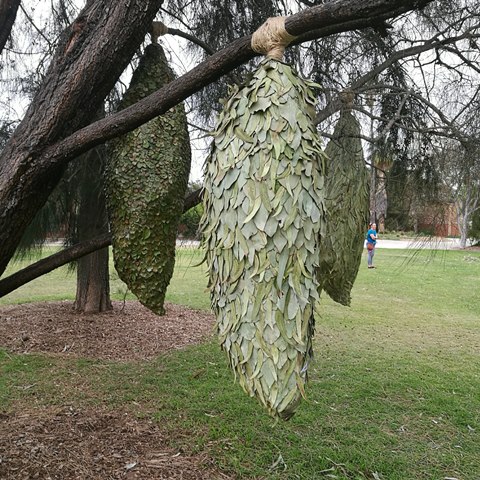 A People’s Choice Award of $4,000 is offered. Georgie Secull, who won this award in 2015, returns with a work that commands its location in the Park. Be sure to visit before November 11 to make your choice.

Janet Bolitho is on the Board of the Gasworks Patrons Foundation which offers the People’s Choice and Jury Prize.