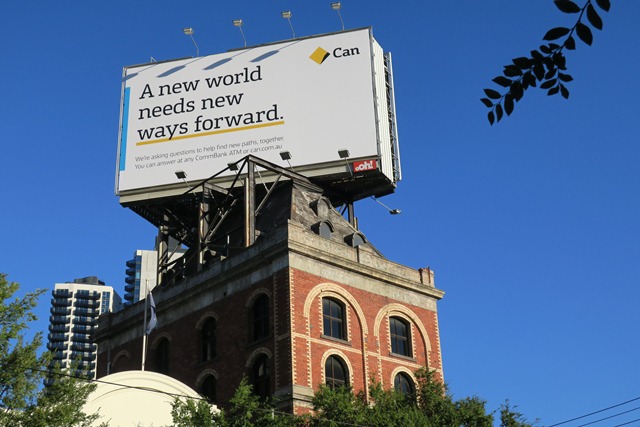 The City of Melbourne has acted to protect t­­­wo of the remaining significant heritage buildings in Southbank – the Castlemaine Brewery on Queensbridge Street and the PMG workshops on Sturt Street. 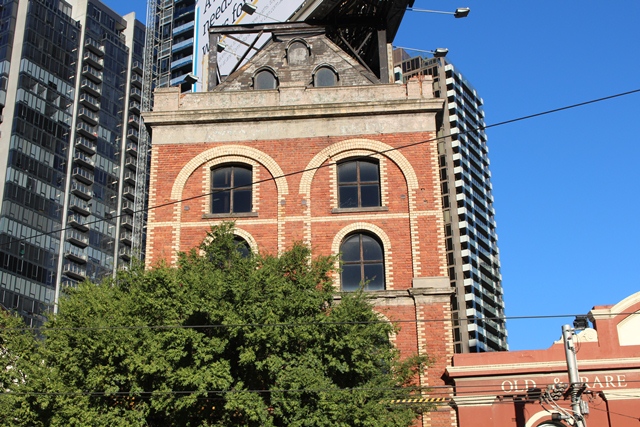 The mansard roof of the brew tower is punctuated by two rows of dormer windows.

The report supporting the heritage listing gave me an appreciation of this five storey brew tower building and its flanking stores. Before reading it, I had seen it mainly as a vehicle for the advertising sign, and not given it much attention or respect.

In its heyday, the Castlemaine Brewery ‘was one of the most extensive, most prosperous breweries existing in Australasia’ according to Garryowen.  It was close to the railway system for the distribution of its products.

By 1906, there was consolidation in the brewing industry and the company amalgamated with five other brewers to form the Carlton and United Brewing Company.

And of course! There was a hotel next to the Brewery, the Castlemaine Hotel. It was de-licensed on 7 March 1958 and demolished to widen the intersection under the Kings Way overpass. Here it is, looking rather like a Jessie Deane tapestry. 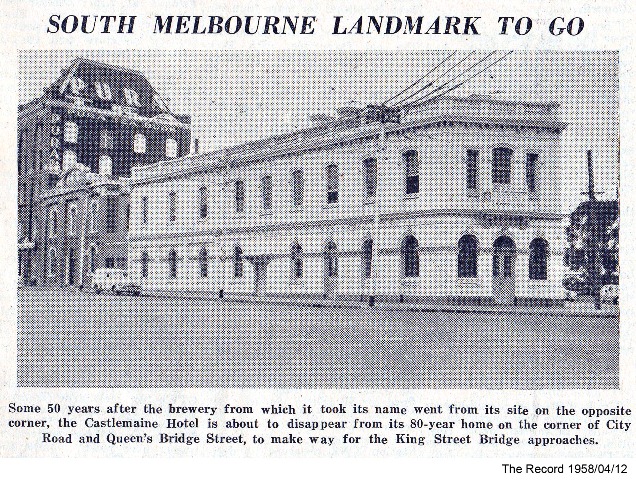 The Brewery is remarkably intact, though burdened by the large advertising sign it supports. The storehouses on either side have been painted, so they no longer look like part of the same complex. How much more impressive and substantial it would look if all the buildings were returned to the polychrome brick. The mansard roof of the brew tower is punctuated by two rows of dormer windows.

More remarkably, the interior of the Brewery still contains some original features such as a layer of cork with a 50mm thick layer of concrete above, indicating that part of the building was used for cool storage.

On a more personal note, could there is a bit of a Virginia Woolf sadness in this newspaper article?

A MAN DROWNED AT SOUTH MELBOURNE The dead body of a man, apparently of the labouring class, aged about 56, was found in about two feet of water at the rear of the Castlemaine Brewery, South Melbourne, on Saturday afternoon. The corpse was removed to the Morgue by the police, and on the clothing being searched, an out-patient’s ticket for the eye and Ear Hospital, bearing the name of William Trow, was found in one of the pockets. A stone weighing about 2lb. was found in another pocket, also a newspaper dated the 18th inst., a cake of tobacco, and a sum of one shilling and fourpence. There is a bruise on the dead man’s face, which was probably caused by a fall, for there is no suspicion of foul play. Newcastle Morning Herald and Miners’ Advocate Monday 2 August 1897, page 5

The connection between the Castelmaine Brewery complex and the Malthouse has been lost. The relationship between them has been completely and utterly severed by the M1 freeway. The Brewery building, its five storeys so impressive in its day, is overwhelmed by the high rise apartment towers surrounding it.

Stronger and more legible pedestrian links between Queensbridge Street and Sturt Street would give more meaningful effect to the heritage recognition of the Castlemaine Brewery and the Malthouse.  Power Street, the main connector, is an off ramp of the freeway and extremely hostile to pedestrians. A strange pathway over the freeway is obscure and unattractive.

On the other hand, I love the relationship between the Malthouse and ACCA as well as the space created between the buildings.  It shows how successfully contemporary architecture and heritage buildings can work together.

ACCA, the Australian Centre for Contemporary Art, was designed by architects Wood Marsh and completed in 2002

Wood Marsh has also designed some of Port Melbourne’s finer apartment buildings: Beacon, the recently completed MINT, and the soon to be built  Alumuna Residences