In all the discussion about Gough Whitlam’s legacy last week, there was perhaps less emphasis on his government’s urban policy than on areas such as education and health.

In An Urban Nation (1969), then opposition leader Whitlam makes the case for why the federal government should be  involved in cities. The starting point is the recognition that Australia is an urban nation, contrary to the stories people tell.

In government, Whitlam and Minister for Urban and Regional Development Tom Uren supported an urban renewal programme grounded in social justice. They were concerned that rising land values in the inner city was leading to people being displaced for commercial development, that people were being displaced by major transport projects and that they were denied participation in planning that affected their communities.

Close to home, in 1973, Emerald Hill was put up for sale by the Family Care Organisation. Following a community backlash, the Whitlam government provided a $3.5m interest free loan to the state government to keep the estate in public hands. It was later transferred to the Ministry of Housing. 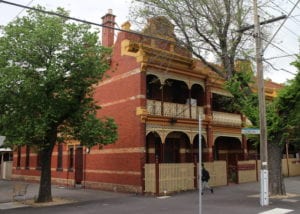 Recently I read Brendan Gleeson’s Lifeboat Cities. He spends some time puzzling over the under-development of urban policy in Australia when Australia is one of the most urbanised nations in the world. Australia’s cities, with their concentrations of population hugging the coast, are most vulnerable to climate crisis. At the same time, he fervently argues that it is only cities that have the capacity to organise themselves to meet the challenges ahead. They need to become ‘lifeboat’ cities. I think he would agree with Whitlam that ‘architects and planners must now fulfil a curative as well as a creative function’.

Since reading that powerful book, the ‘boat’ on Tower 5 at Yarra’s Edge has become a symbol of that lifeboat city to me. It is always there on the northerly horizon of Port. It may not even been intended as a boat, mundanely hiding plant and equipment, but it looks like a boat to me.

On a cheery day, the boat reminds me of the possibility of  lifeboat cities but on a gloomy day it appears to be already stranded, washed up from failing to grasp the challenges of an urban nation. 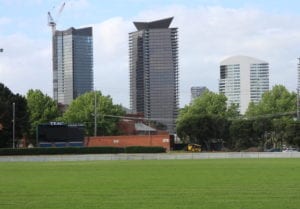 Green, Shane Forty years ago Emerald Hill was saved from the wreckers, The Age,  November 25, 2013