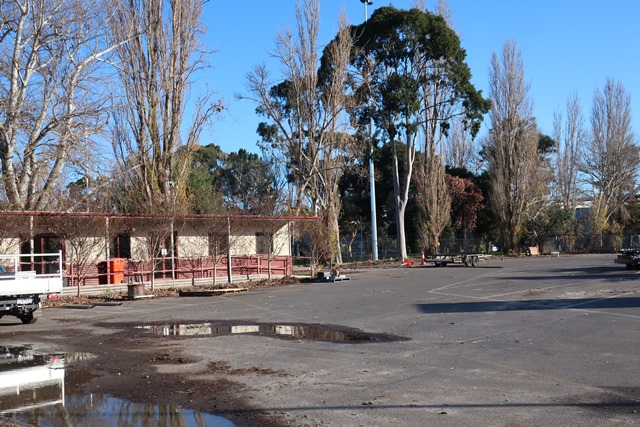 The Reserve was created in 1948 out of Fishermans Bend land that had been used by the American army during the war as a storage base for tanks, planes and other military equipment.

J.L. Murphy was James Laurence Murphy, a cordial manufacturer. He was a long serving South Melbourne Councillor (1904 – 1942) as well as the representative for Port Melbourne in the Legislative Assembly from 1917 to 1942, the year he died.

The ascetic looking Murphy was not only long serving, but tenacious. Trove is thick with reports of Murphy addressing one public meeting after another pressing the case for affordable housing for working men in Fishermans Bend, as well as leading deputations to the premiers of the day. He was instrumental in securing the State Savings Bank critical role in providing the financial arrangements which enabled the Garden City bank houses in Port Melbourne. Speaking at a meeting to form a Progress Association at the Hibernian Hotel in July 1928, he reviewed the ‘strenuous effort’ that had led to the creation of the first houses in Fishermans Bend. Included in the land set aside for housing was 16 1/2 acres for recreation – what was later to become Murphy’s Reserve.

In the north western corner of the Reserve was a house where caretaker and curator Les Murphy and his family lived. He is remembered as ‘one of the best curators in the business’, ‘always smiling’ and ‘a lovely man’.

By the late 1990s, the house had disappeared, and that corner became a weed covered, neglected corner of Port Melbourne – on the margins of St Kilda Town Hall’s attention. Long before community gardens became popular, Vince Coluccio would walk from his home in Port Melbourne each day to tend a spectacular tomato patch he’d cultivated in the informal space. No one was looking.

In 2011, the City of Port Phillip tidied up the site and leased it to its open space contractor, Citywide, even though locals would have preferred it to be incorporated into the Reserve. A spectacular heap of bluestone of unknown provenance piled up in the corner.

In 2012, the fateful Fishermans Bend re-zoning was announced and Murphy’s Reserve was propelled into a different future where the generous open space set aside all those years ago will also serve a new community.

That corner site has always remained Crown land. It was not zoned as Public Parks and Recreation but as a Public Use Zone. In the lead up to the 2018 state election, local member Martin Foley in the company of Education Minister James Merlino announced that it would be the site for a new secondary school.

Citywide vacated the premises on 30 June. The way is now clear for work to begin on the first secondary school in Fishermans Bend. Funds were allocated in the 1990/20 State budget as part of a $624.8m package for new schools throughout the State.

It is intended that the new school will play a similar role as a catalyst for community as the South Melbourne Primary School.