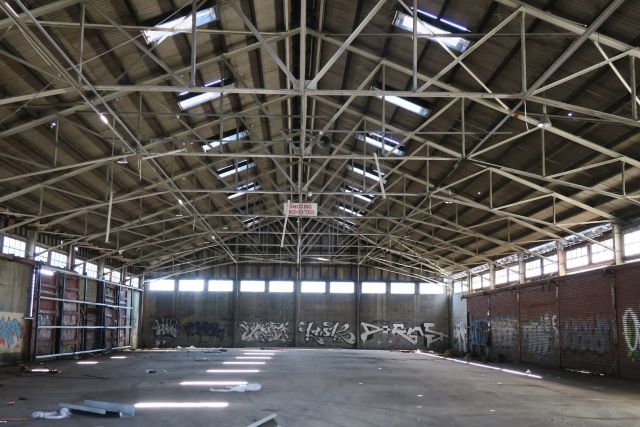 The new park, between the Mission to Seafarers and the River, will be comparable in size to the State Library forecourt, generally acknowledged to be one of the most successful public spaces in Melbourne. The Park will utterly transform the long neglected space between the Mission and the River. The Park is part of developer Riverlee’s public benefit contribution from the Seafarers development.

North Wharf became a time capsule of port operations when construction of the Charles Grimes Bridge cut off access to it in 1978. Not only the Bridge but the advent of containerisation had rendered the wharf apron, cargo shed and crane redundant. These remnants are now the only intact surviving examples of this era of pre-containerised port operations, and have the highest level of heritage protection.

Riverlee is making good all these heritage elements as well as constructing the Park. The 1948 electric travelling Malcolm Moore crane, likely to have been manufactured in workshops in Port Melbourne, has been smoothly restored and moved to its new home on the eastern corner of Goods Shed No 5. The crane itself was a technical marvel in 1948, moving boxes, unitised cargo, presaging the container period. The roof of shed 5 has been removed and the steel trusses manufactured by Vickers Ruwolt been taken off site for preservation work.

The design ideas for the Park give effect to the City of Melbourne’s policies to bring nature into the City and increase tree canopy cover. They also reflects their new found embrace of the City’s maritime heritage – the influence of Cr Jackie Watts, chair of the newly formed Melbourne Maritime Heritage Network.

The restored Mission to Seafarers, now warmly brown rather than coldly grey, is the anchor for this precinct and all the elements gather and strengthen around the Seafarers theme: the Seafarers development itself, the Seafarers Bridge, and now the Seafarers Rest Park.

I gazed at the faces on the hoarding and they looked back at me as I tried to access some sense of the people who had worked on North Wharf and contrasting the harsh conditions that they experienced with the pared back nature rich luxury promised by the development. ‘Heritage’ is an ongoing mystery to me – how to communicate from the past to the present. The machinery and the structures can be faithfully restored but reaching to the lives of people is less accessible.

The design of the Park incorporates more vegetation than has been seen at this site since first settlement. The trees already on site will be retained and more will be added. Views to the Mission to Seafarers are to be respected. Children will be welcomed with enticing play equipment. The access to the River will be unencumbered. Various maritime artefacts will be incorporated.

The skilful design hand of landscape architects Oculus, the designers of the Park, can already be seen in the Jim Stynes Bridge just downstream of Shed No 5. Oculus also designed the Maritime Cove Playground in Port Melbourne where Port equipment has been successfully incorporated for play.

The Park does not include the former wharf apron, now bitumen promenade, between the Jim Stynes Bridge and the Seafarers Bridge, a direct cycle route between Docklands and the Seafarers Bridge. Further thought will need to be given as to how to manage that complex and contested space between cyclists and pedestrians and the desire of future park goers to access the River.

Will Seafarers and its associated park be an exemplar for the city – where heritage preservation, adaptive reuse of heritage buildings, nature and embrace of the water combine?

Concerns? I have a few

Nevertheless, it will be a long and tantalising wait till 2023 for the realisation of the Park.

Seafarers by Riverlee one bedroom apartments from $825,000