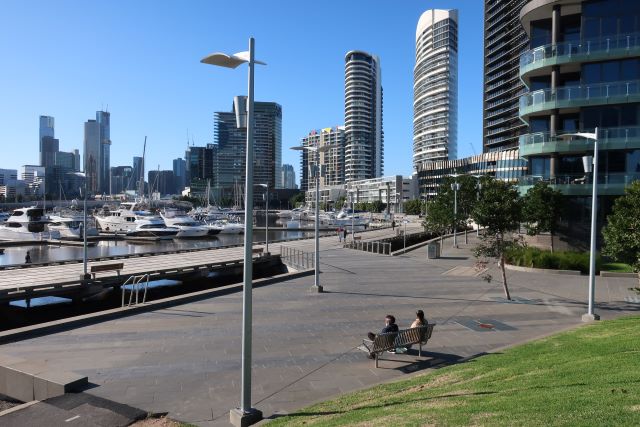 At 8 am on Sunday 21 June, about thirty people plunged into Port Phillip Bay to mark the winter solstice.

Winter sunlight is precious. In COVID-19 lockdown, winter sunlight is even more precious. And more precious still for the many people who do not have access to a balcony, a verandah or a backyard who rely on parks close to where they live for their wellbeing – and that’s more than the daily dose of Vitamin D, vital though that is.

The bench in the sun is favoured above the one in the shade in winter.

As Melbourne grows ever denser, the City of Melbourne is seeking to introduce planning controls to protect winter sunlight to neighbourhood parks within its municipality. Some parks are already overshadowed, and the intention of the planning change is to prevent further overshadowing. Until now, this level of planning protection – access to winter sunlight between 10 am and 3 pm – has been given to only a handful of key public spaces: the State Library forecourt, Federation Square and the Yarra River1. The usual, and less stringent, standard for overshadowing is the equinox when day and night lengths are even. The difference in shadows between the equinox and the solstice is illustrated in this diagram by Hodyl & Co.

To make such a change, a planning scheme amendment is required for which a clear process is laid out in the Planning and Environment Act. Evidence must be marshaled to provide a compelling justification for the amendment. The ‘why’ must be clearly articulated. Definitions must be clearly crafted to capture the intention and resist legal challenge. People affected by the change must be given an opportunity to comment on a draft. Then the whole amendment goes to a Planning Panel which considers submissions, and hears further representations. The Panel makes recommendations back to the Council. At the end of the day, the Minister for Planning decides whether to approve the amendment.

Did I mention that this is a lengthy process? The process for this winter sunlight amendment was initiated in April 2016. With impeccable, though probably unintentional timing, the Directions Hearing to get the Panel process underway began on June 22nd, the day after the solstice.

Make no mistake, this bland sounding Amendment, no 278, has implications. It would constrain development. Not surprisingly, it is being contested by those who argue that the sunlight control should be discretionary, rather than mandatory, and can be traded off for other benefits such as further public realm improvement or affordable housing.

Some shadows are even foreshadowed, so to speak, in the sense that developments have been approved, but not yet built. As long as towers stand, their shadows will accompany them, locking in shading in the future city.

The Yarra River is one of the few public places protected by a mandatory planning control (Amendment C270). A must is as rare as hen’s teeth in planning schemes. Even that mandatory control has been breached in several applications including 7 – 23 Spencer St.

In late May, the shadows of the block of towers on Collins Wharf (and there are more to come) blanketed the Yarra, deepening the chill of the morning. The slivers of light on the River show where the light finds a way through the gaps between the buildings.

Of course the City of Melbourne is not alone as a city undergoing such intense densification. New Yorkers for Parks make the case for sunlight in New York City’s Fight for Light, even going so far as to pin down the definition of sunlight ‘as light that is emitted by the sun and reaches the ground, including direct sunlight and sunlight diffused by cloud coverage, but excluding light reflected from buildings and other surfaces’.

Access to sunlight is so basic, so fundamental, to public health. It has been taken for granted but now access to it requires formal protection.