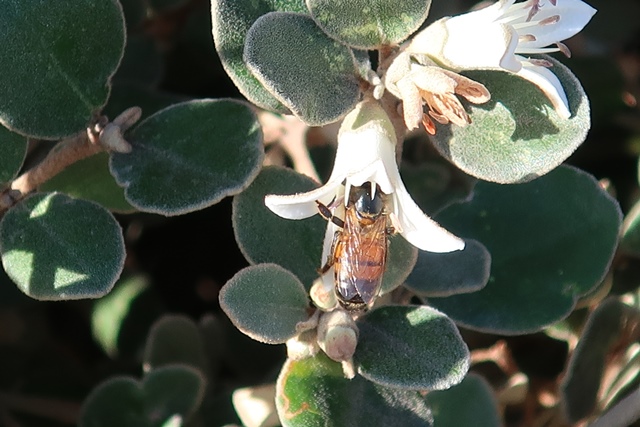 It rained. At last. It had seemed fruitless to invite people to the annual community planting day at Lagoon Reserve, even though the mulch had been spread in readiness and the date arranged.

But it’s about keeping the faith, says Alice, who has coordinated the annual planting day at Lagoon Reserve for over a decade.

Now she’s handing that role on. Over the years, Alice has carefully recorded each planting – which part of the Park was planted, what was planted and what the conditions were. A precious record of change.

Alice has been a most gentle steward of the edges of Lagoon Reserve. Along the way some plants have died but others thrive. Flowering now in the Reserve are correas, red and white, reflexa and alba, and an early wattle cheers the grey.

Stewardship is a word I’m hearing a lot more lately. The parlous state of nature invokes the need for care. Lagoon Reserve itself is a kind of metaphor – nature at the edges – dogs, people, sport and recreation at the centre. But those edges are are growing richer and performing a valuable ecological role.

With recent news about plunging rates of biodiversity decline across the world, cities can play a vital role in nature conservation,

The lead author of the recently released UN report said

“The overwhelming evidence . . . from a wide range of different fields of knowledge, presents an ominous picture. The health of ecosystems on which we and all other species depend is deteriorating more rapidly than ever. We are eroding the very foundations of our economies, livelihoods, food security, health and quality of life worldwide.

It also tells us that it is not too late to make a difference, but only if we start now at every level from local to global. Through ‘transformative change’, nature can still be conserved, restored and used sustainably.”

People feel strongly about Lagoon Reserve. It’s used throughout the day – by dogs and their owners, Albert Park College students, and the chirruping children from neighbouring Bubup Womindjeka children’s centre. Where there’s strong ownership, there’s strong oversight, says Dr Judy Bush of the place she knows best – Merri Creek. Nowhere more true than here. When the Council commissioned a street artist to paint the Lagoon Pavilion as a graffiti deterrent, people were cranky, not so much about the artwork, but because ‘noone asked us’.

With that lesson learned, when a toilet block in neighbouring Edwards Park was earmarked for street art, there was community involvement at every step of the way. People suggested themes – nature and history. Students under the guidance of established street artists developed the artwork. People were invited to watch the artwork being painted.

The companion of stewardship is re-wilding – bringing nature back. Already many more species of birds are found at Lagoon Reserve. Imagine if those animals came down off the walls and back into our inner urban lives.

This year the focus will be on planting wildflowers in the beds closest to Liardet St. Please join us, even to put just one plant in the ground, on Saturday 25th. This is not a marathon working bee, just an opportunity to connect with nature in company. Every support is offered by Citywide for the City of Port Phillip. They’ve already spread the mulch. They dig the holes and provide the plants which have all been grown locally at Bili Nursery (formerly Skinc) at Williamstown Road.