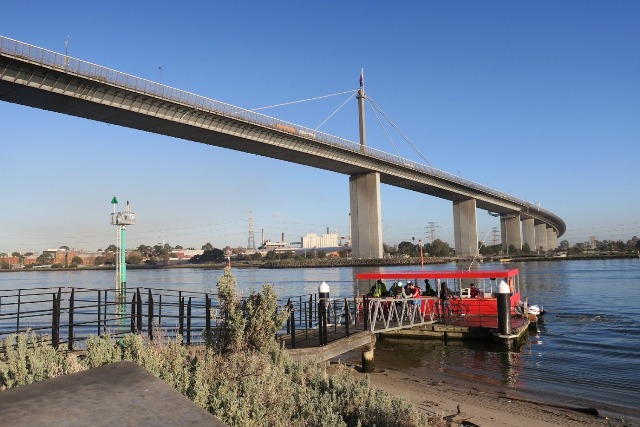 Talking about the Yarra again

This is (a slightly edited version of) my contribution to the Imagine the Yarra Conversations Public Event held at the Arts Centre on 19 September. It was prepared to be spoken rather than as a written piece.

My subject is the River entrance.

I pay my respects to the people and elders of the Wurrundjeri on whose land this conversation is being held, right here on the Birrerung, the River of Mists and Shadows.

I’d like to introduce you to the place on the River that I know best but you’ll have your special Yarra place, I know.

It’s here, under the Westgate Bridge. And I call it Westgate Beach.

It’s as close as you can get to the River Entrance on the southern side. The Yarra River Protection Bill seeks to ”protect the Yarra/Birrerung as one living and integrated natural entity” – from source to mouth.

The extension of the Port at Webb Dock into the Bay means you can’t walk beyond the Port boundary to the River entrance. The mouth of the River remains elusive and tantalising.

The River has been channelized, canalised, smoothed and sculpted – largely to serve the needs of the Port. Ships got bigger, required a deeper draught, and with each change of shipping technology came a change to the River and the Port.

The Yarra River is the conduit, the sea highway, the sea road, for nearly everything we consume – our morning coffee, the bikes we ride, the computers we use and much else besides  –  all in a box on a ship coming up the River. 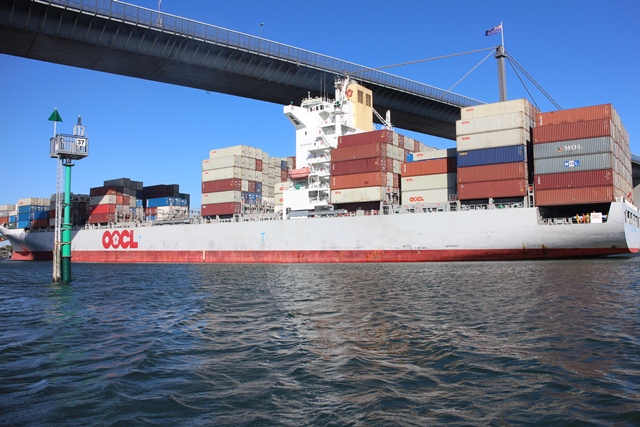 The rain falls somewhere in the Yarra catchment. It follows kerb and channel to the drain –   to the creek –  to the River.

The Yarra River is the conduit, the sea highway, the sea road for the return journey for every bit of litter dropped in the streets of its catchment.

Go down to Westgate Beach 24 hours after heavy rain …

On the Beach, a reverse supermarket of the detritus of our consumption – straws, cigarette buts and lighters, cans and bottles, and the little soya sauce fish that seem to breed among the rocks. But most of all there’s polystyrene – aged chunks that look like coral. The spaces between the rocks are dense with the constituent beads into which it crumbles. 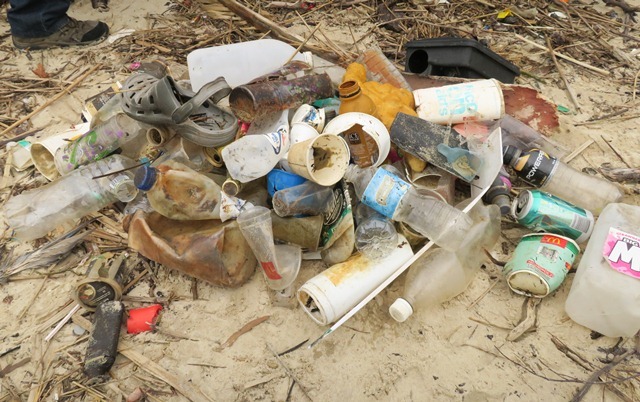 After the rain at Westgate Beach

The nexus between rain and river borne pollution is revealed as obviously as night follows day.

It’s a nexus that needs to be broken.

But that is not all to the life of this little beach!

Mark Norman, Chief Conservation Scientist to Parks Victoria, has dived deep into the River at this place.

The Oyster Blennie breeds under the Westgate Punt platform.

There are Polychaetes, segmented worms in the sediment.

Swans as well as ships go under the Bridge.

The Friends of Westgate Park care for this bank of the Yarra which has only recently been added to the Park. Between the rocks they have planted grasses, saltbush, rounded noon flower and pigface.  Soon the pigface will flower with ‘magenta fire’ – as Gordon McCrae described it.

Banksia inegrifolia, the banksia of this place, line the River bank.

And the ‘fragrant acacias, shaking their golden blossom curls’, to quote Garryowen, that once arched across the Yarra, bloom again in Westgate Park.

Overhead, the River of traffic flows unceasingly across the Westgate Bridge – its snags the breakdowns and the crashes.

The Bridge offers mobility and access but the River offers us the stuff of life itself – water.

Every empty plastic bottle of water washed down the River landing up on this beach is an affront and an insult to our Yarra – as our drinking water, straight from the tap, is some of the highest quality in the world.

70% of Melbourne’s drinking water comes from the Yarra River. As Melburnians we are all have Yarra flowing through us.

We’ve got a serious dose of complacency around the Yarra River. We laugh at the stories of times past when the River was befouled by noxious industries and trades but are blind to our contemporary sources of pollution. We’re excited to see a platypus or dolphin up the River, but tonight we’ve been reminded of the abundant life that was once associated with the Yarra.

As Uncle Bill Nicholson said at the start – if the River is not healthy, how can the people be healthy? It’s as simple as that.

The Yarra River Strategic Plan is to be grounded in the community’s vision. Uncle Dave Wandin has encouraged us to think one thousand years ahead – not a mere fifty years. Miracles take longer, he said.

As the poet Les Murray said: ‘Nothing is said till its dreamed out in words’.

Add your story to the Yarra map and bring your voice to the developing Yarra Strategic Plan.

How do you write about the same thing again and again and stay fresh?  Some time ago, I attempted the discipline of haiku in writing about Westgate Beach.

On the Yarra bank