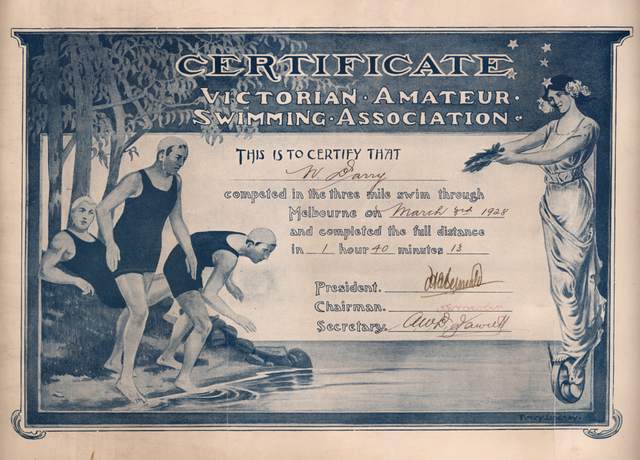 Talking about the Yarra

In March 1928, Port Melbourne’s Norman Barry competed in the annual three mile Yarra River Swim. He received this Percy Lindsay designed certificate. Sixty five women were among the more than 400 entrants. Barry trained with other Port ‘boys’ between the piers.

The tradition of the Yarra River swim was discontinued because of pollution concerns.

image thanks to Helen Barry

There is renewed interest in river swimming in Melbourne and other cities around the world. Yarra Swim Co  wants to revive the race to Prince’s Bridge and have a place in mind for a floating Yarra Pool near Enterprize Park.  ‘Swimmable’ encapsulates an aspiration for the Yarra River. That is their imagination for the River.

The Yarra Riverkeeper Association’s vision for the River is plain – it wants Our  Yarra to be healthy protected and loved.

The Yarra Riverkeeper and the Port Phillip Baykeeper head down the Yarra once a month trawling for microplastics – one 30 minute trawl from the mouth of the Maribyrnong and one thirty minute trawl up the Yarra from the dripline of Bolte Bridge. Along the way they talk –  river and bay talk. A thermos of coffee warms the journey when its a bit chilly on the River. Through Andrew and Neil, the connection between River and Bay is strengthened. Ideas are clarified, funding flows. And they get to know the River a bit better each time. 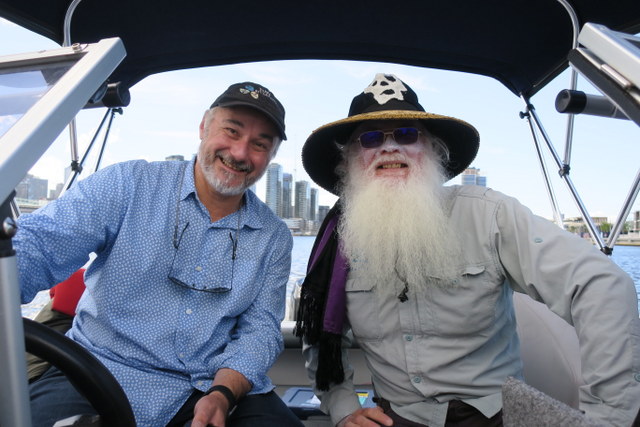 They notice what’s going on – unusual dicharges from ships, what’s coming out of the stormwater drains, what birds are around, anything out of the ordinary.  They see the River from a River point of view – no other  agenda. Not shipping, not fishing  – just being on the River.

The tide was going out and there were strong winds especially down the Maribyrnong.  There was plenty of bird life including several small grebes (hoary-headed we thought) and at least two pairs of chestnut teal. We saw a pair of oyster catchers at Coode Island. There were very few swans, only a single pair (Female F11) at Herring Island . There were little pied cormorants but mainly below the city, and the large flock of little black cormorants we saw had disappeared.  There were not as many coots as usual and not even the large number of seagulls we sometimes see. The water was pretty murky after Friday’s rains.

That was how the River was at that time on 12 September and it will be different today.

Many older Port people have strong memories and associations with the River. Lois remembers riding her bike after school down to the Punt at the end of Williamstown Road to meet her father returning from work at Newport. But now the River is hard to get to. There are many roads to cross. It’s easier to go over the River on a bridge, than to get close to the water’s edge.

The Yarra as it runs through the City is very hard edged and urban.  It’s only when you get down to Westgate Park that you get the feeling that you’d just like to get down to the River bank and take your shoes off and paddle.

A far reaching, far sighted bill to protect the Yarra River now and into the future has passed the Lower House with support from all parties. The Yarra River Protection (Wilip-gin Birrarung murron) Bill 2017  will soon go to the Legislative Council where hopefully it will enjoy the same level of support.

Melbourne Water has opened a conversation with us, Melburnians, on our vision for the Yarra.

They are hosting a Yarra River Conversation at the Arts Centre in Melbourne on Tuesday 19th September. I’ll be talking about this part of the Yarra – the one I know best.

Close your eyes and imagine the Yarra …

Yarra Riverkeeper Association and Port Phillip Baykeeper are part of the Waterkeeper Alliance of more than 150 waterkeepers worldwide.

Janet Bolitho is a Board member of the Yarra Riverkeeper Association