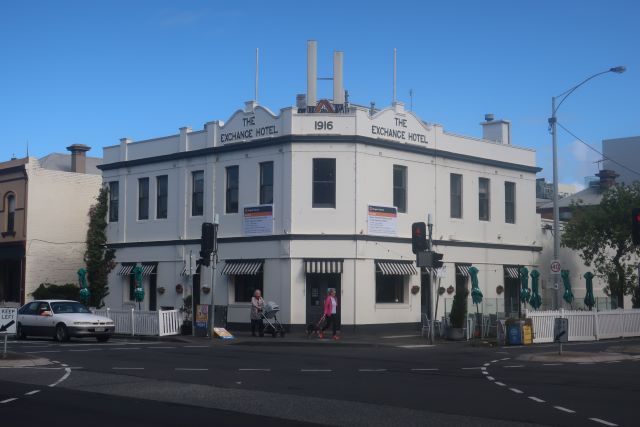 The Exchange Hotel in Port Melbourne is for sale by auction on 14 September at 10.30 am. The auction is in the hands of Burgess Rawson. The Exchange is leased by the Australian Venue Company which is behind more than 190 hospitality venues in Australia, 42 in Melbourne. The Local, also in Bay St, is another one of its venues.

When the hotel was first built in 1854, it was known as the United States Hotel, one of five hotels between the Beach and Rouse St.1 Together with the Royal Mail, now The Local, it was associated with the former Sandridge Post Office, now part of the Albert Park College campus.

The hotel’s most recent heyday was in the late 1980s and early ’90s when it was transformed into a traditional Irish pub known as Molly Blooms. It hosted St Patrick’s Day celebrations when Rouse St was closed to traffic and Irish Australian bands played in the street.

Molly Blooms played a role in kick starting Shane Jacobson’s career. He was an event manager for the St Patrick’s Day festival and needed toilets. That’s how he met Glen Preusker, the owner of Splashdown Toilets. One thing led to another and then there was Kenny.2

The Loaded Dog band was so fond of the pub that they wrote a song about it, Remember Port Melbourne, which lulls you into nostalgia even if you’ve never set foot in the place.

After Molly Blooms, the hotel reverted to The Exchange, a contemporary venue responding to the current Port Melbourne community’s eating and drinking preferences.

The Exchange is leased to The Australian Venue Company to 2031 so there doesn’t appear to be any need to be concerned over last drinks.

The site at 103 Beach St will be cleared by the end of the day. (Incidentally, or coincidentally, the demolition is being undertaken by MANN group who dismantled Shed No 5 at Seafarers). The future of the development proposed for the site is less clear.

To recap. There is a planning permit for the site. After Luxcon bought the site from V-Leader in 2021, it sought to amend the permit to increase the number of residential units from 12 to 21 and to add another storey to 5 levels, to increase the number of car parking spaces from 30 to 51 and the bicycle spaces from 24 to 46. There were some other less substantive changes.

On 28 July, the amended plans went to Port Phillip Council’s planning committee with an officer recommendation to approve the changes. A motion to refuse the amended permit application was defeated. However, Gateway Ward Councillor Cr Cunsolo proposed a change to

“Delete the roof terraces and associated stair access from top level units, delete central stair to roof, and minimise lift overrun, the highest parapet reduced to RL 22.5 around plant equipment in the centre of the roof. A roof access hatch to access services is allowed.” (condition ii)

Her change was supported and is now the formal Council decision.

It is unclear at this time whether the developer will challenge, or accept, this change.

Mirvac imagined the Foodstore as the heart of the yet to emerge Beacon Cove community. For almost twenty five years, it served the precinct well, though becoming rundown in recent years. The Foodstore closed in 2020, and since then has contributed to the dispiriting deadness of the Waterfront Place precinct.

While there is exasperation and frustration at the plight of the languishing precinct, resolution of planning issues at Waterfront Place looks some way off. The Council is still waiting on a VCAT decision on another Council decision for 1 – 7 Waterfront Place. It was due at the end of March.