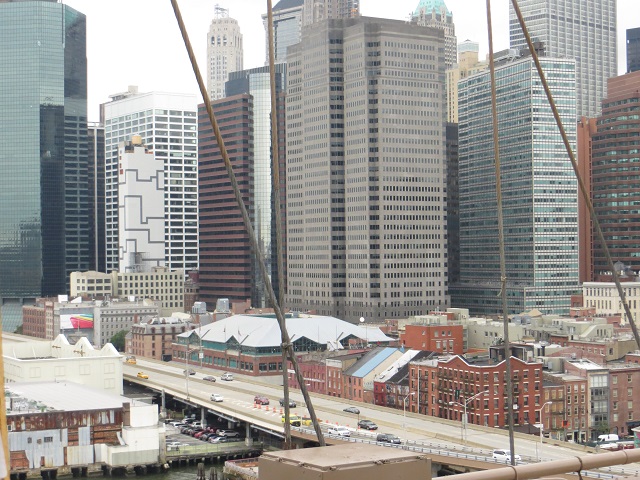 from a visit to New York

‘…one ought every day to hear a little song, read a good poem, see a fine picture, and if it were possible to speak a few reasonable words. (Panel on the Brooklyn Public Library)

Today we re-encountered the car realm. For those readers who have begun to wonder whether this traveler is delusional and that New York is paved in green, today was a reality check. 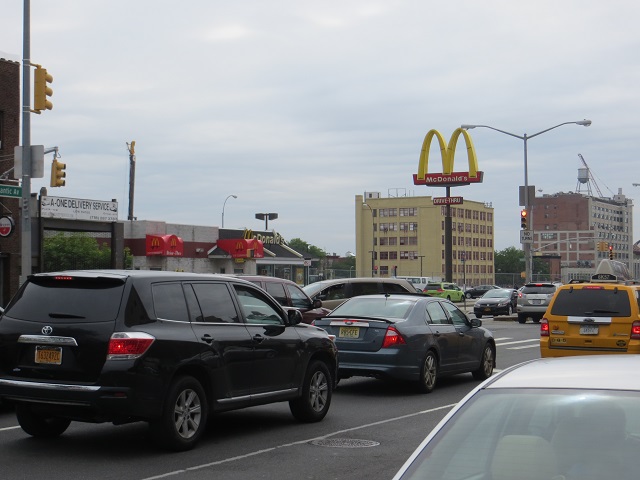 We walked the Brooklyn Bridge. The Bridge was dense with tourists like ourselves and irritated bike riders being held up by people taking selfies. The overriding, overwhelming impression was not of the engineering marvels but the noise and volume of traffic below and the view of the freeways on the East River.

from Brooklyn Bridge towards the East River

We hastened to refuge in the soaring, soothing Brooklyn Public Library. This inspiring building with its magnificent entrance extols the power of the written word. So I thought today to share some words from the New York Times. (10 06 14) While they are not as uplifting as the quote above, they have some meaning for their relevance to Port Places and Australian politics.

‘Reducing our carbon output is not only necessary for the health of the planet, it’s an opportunity to continue to improve the health of the Iowa economy – which is and will remain my No 1 priority’ (said representative Bruce Braley, the Democratic Senate nominee in Iowa)

‘Denying the existence of climate change is proving to be a problem for many Republicans right now, and certainly a long term albatross for the party’ said Matt Canter, the deputy executive director of the  Democratic Senatorial Campaign Committee

‘in 21st-century Manhattan …Money flows like a flood-swollen river down avenues and side streets, and rents triple, quadruple, quintuple. The ecosystem that sustained New York City for centuries, great wealth alongside modest means, withers.’

‘At stake is our once-glorious urban ecosystem. Too many global cities, from London to Paris to San Francisco, have turned gilded at their cores.’ Michael Powell  @powellnyt

And to close, from above the entrance to the Library