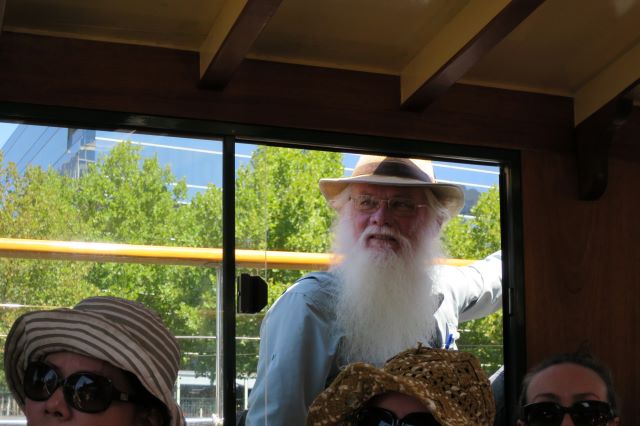 Picking up seashells. Might this happy childhood memory be another  experience of nature to be lost to urban children?

Blake says that raking and grooming city beaches in response to safety concerns about glass and syringes may make the beach look neat and tidy, but it removes shells and breaks up those that remain.

Yet this harsh inter-tidal environment with its twice daily alternation between wet and dry  is a rich zone for biodiversity and much of its life is as yet unexplored. We are possibly more aware of megafauna than of meiofauna –  those microscopic invertebrates  living between the sand particles on the sandy shore.

The Baykeeper works with schools, government, researchers, business and community to protect Port Phillip Bay. Blake is one of a network of Waterkeepers, (which includes the Yarra Riverkeeper), non-governmental advocates for an identified river, lake, bay, or sound.

This day of beach and bay exploration for volunteers caring for the Bay was made possible by Pelican Expeditions Two Bays Program. Each summer this outstanding group of people take people out onto the Bay on their beautiful catamaran to facilitate conversations and connections about the Bay.

The day began with a beach ramble.

Within a metre of St Kilda Pier, Harry Breidahl picked up two shells that tell an amazing story. 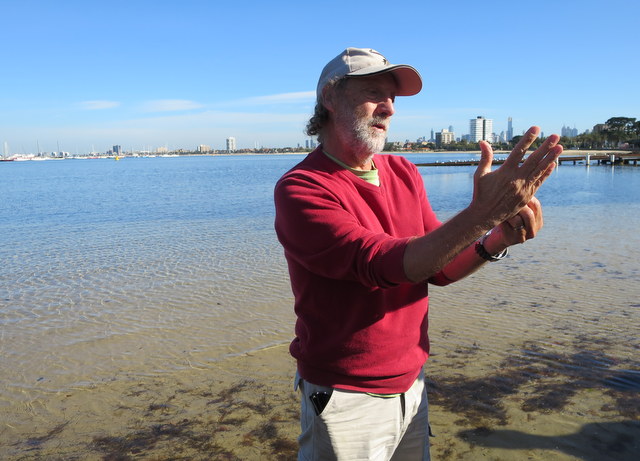 The drilled hole in this shell below is no random accident. The hole is neatly drilled by the snail Polinicis conicus into the heart of the shell to feed on the soft body within. In some seasons, the snail also releases a gelatinous egg mass, sometimes found on the beach, full to the brim with eggs. 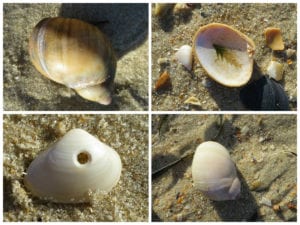 Breidahl is part of an international network of ocean educators committed to improving ocean literacy – understanding the ocean’s influence on us and our influence on the ocean. It is founded on seven principles, the first of which is

The Earth has one big ocean with many features.

Port Phillip Bay is part of this big ocean.

Beach walkers tend to walk energetically for fitness, indifferent to the wonders beneath their feet. Maybe mindful beach combing is just as therapeutic.