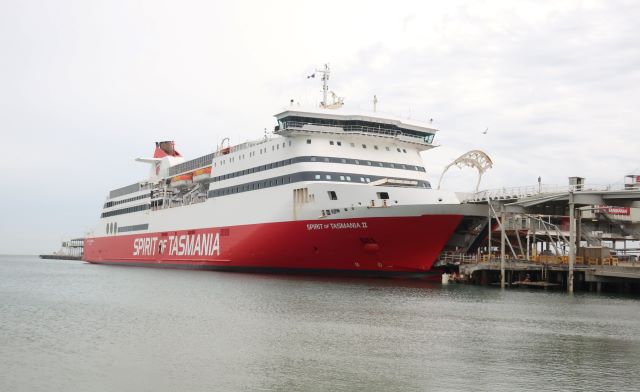 The daily comings and goings of the Spirit of Tasmania from Station Pier will be a thing of the past when TT Lines move their operation to Corio Quay near Geelong when their lease runs out at Station Pier in 2022 – if not earlier.

TT Lines ordered two new, and larger, ferries in 2018. Each ferry will increase capacity by 500 passengers and an additional 200 freight and passenger cars. The first ship builder experienced financial difficulties and the order is now with Finnish ship builder Rauma Marine Constructions.

Before the decision to move to Corio Quay was made, TT Lines with the Victorian Ports Corporation, had been working on ambitious plans to upgrade facilities at Station Pier to accommodate the larger vessels – plans which would have required significant government investment in the precinct. Even with the the best intent and design, it was hard to see how even more cars, and even more trucks, could be accommodated under the present road configuration.

The Trans Tasman ferry service started at Station Pier in 1985 when the long term future of any form of shipping at Port Melbourne’s piers was in doubt. The last passenger ship, the Australis, had called at Princes Pier in 1977 and Princes Pier itself was decommissioned in 1985. Cruise shipping was not yet a ‘thing’. The ‘port’ in Port looked in danger of disappearing.

In the late eighties the Cain Labor state government developed a far reaching plan for the redevelopment of redundant government owned land called Framework for the Future. It included many potential projects, since realised, such as Docklands. The land between Port Melbourne’s piers (now Beacon Cove) was also identified as a site for redevelopment. The state partnered with the Sandridge City Development Corporation (S.C.D.C.) which put forward a grand scheme for an canal and marina based development with towers and hotels. It encountered fierce local opposition for its gross insensitivity to the local context. Following the stock market crash of 1987, the economic downturn that followed, and contamination issues on site, the much vaunted scheme encountered one difficulty after another.

By 1992 the scheme was in deep trouble with barely a week passing when it was not in the headlines. An inquiry into the Bayside site by the Auditor General was damning, There was new wind in the sails of the sustained and ongoing community opposition which put forward alternative proposals. The scheme finally collapsed in acrimony with the S.C.D.C. suing the state government alleging the Government failed to honour a confidential agreement to guarantee the project’s financing. The only work that had been completed in the five years by the S.C.D.C. was the renewal of public housing in Princes St as required under the development agreement.

By June, the project had collapsed. The only way forward was to begin all over again, to go right back to the drawing board.

In early August, over 700 people participated in a design charrette, the Bayside Open Forum, out of which came a set of principles and preferred outcomes for the Bayside site. The experience of the intervening five years and the S.C.D.C. proposal had made people very clear about what they did and did not want to see in any new development. The principles and outcomes of the Bayside Open Planning Forum were published and used to guide the development of what became Beacon Cove.

Participants at the Forum wanted to see the piers remain a focal point of the area, and to support the ongoing operation of the Trans Tasman ferry.

A scheme remarkably similar to the one shown in the sketch below was subsequently implemented with a row of trees and vegetation shielding the truck park and a pedestrian walkway along the edge.

The severely deteriorated eastern wing pier was removed and replaced with the truck park. The wing piers had accommodated smaller vessels such as the bay steamers. The symmetry of the wing piers, so well illustrated in Charles Daniel Pratt’s photograph, disappeared.

The Spirit’s move opens up the question of what will become of the TT Lines carpark.

Will this be the long awaited opportunity to finally resolve unsatisfactory Waterfront Place?

And what of the cruise industry? Commentators suggest that after a slow down in the coming season, cruise shipping will pick up again with more stringent health tests, and changed practices around serving food. The Carnival Lines (which includes the fleet of Princess ships) are incorporated in Panama and are exempt from U.S. taxation and labor laws. This suggests tighter regulation of the industry is unlikely. Regaining the confidence of the cruising public will be the precondition for any recovery. At this stage, the Victorian Ports Corporation website still shows a full programme of forward cruise ship visits.

Let’s keep an eye on what happens.

Rowan Moore Is the cruise industry finally out of its depth? The Guardian 19 April 2020

it takes many hands to make a Port Places post: thanks to Russell Griffiths, Allan Marshall and Pat Grainger