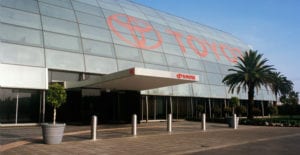 A Port view –  after Toyota announced that it will cease manufacturing cars in Australia in 2017.

Smoke from the fires around Melbourne was in the air.

The Australian car industry’s ‘birth was driven by an odd mix of war-driven fear and post-war exuberance’, wrote Terry McCrann* and that found its expression right here in this place –  Fishermans Bend, Port Melbourne.

Connections with Toyota and the Port community have been especially strong in recent years.

Toyota’s new corporate headquarters in Port Melbourne opened in 2004,  in the presence of Prime Minister John Howard and Premier Bracks – in a long tradition of Prime Ministers and Premiers wanting to be associated with the car industry. It was branded Toyota Green.

These were some of the environmental features of the building

Toyota has also generous in sharing their expertise and experience with the building.

Investing in the community

Toyota has the most strategic, committed and far reaching corporate social responsibility program that I have ever come across. They have gone out of their way to get to know and understand the communities they work in, both here in Port Phillip and in Hobsons Bay. They have invested in thoughtful long term relationships through their Community Spirit program. Through their business mentoring program, they have supported local community groups to develop more strategic approaches to their work. Their quarterly art exhibitions have stimulated the careers of emerging artists and given others opportunities to show their work in a professional setting. And they invited community in to their headquarters with a generous spirit.

Holden and Toyota own about 41 hectares of land in Port Melbourne. While the body is still warm, speculation begins about this land.

Thank you Toyota for your investment in this place.